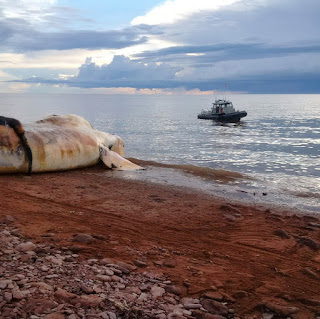 This has been a terrible year for one of the most endangered marine mammals on Earth, the North Atlantic right whale, which has a surviving population of just 500. As I reported in Wednesday’s Portland Press Herald, at least a dozen of the rare whales had been found dead off New England and Atlantic Canada, most of them in waters they had not previously been known to frequent.

Another whale carcass has since been reported off Massachusetts.

Why is this happening? Scientists aren’t certain, but food — and therefore climate change — is believed to be a driving factor. Read on to learn more.

I’ve reported extensively on the right whales in the past, when it appeared they had finally turned a corner. For more on this, start here.