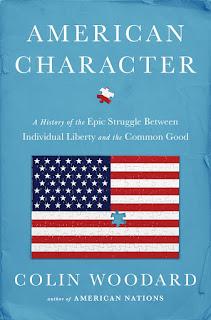 I’m pleased to announce that the Penguin paperback edition of American Character: A History of the Epic Struggle Between Individual Liberty and the Common Good goes on sale today across North America.

The book has a new introduction as well, placing it in the context of Donald Trump’s authoritarian-friendly presidency, the very sort of challenge to liberal democracy the book forewarned of.

I’m not doing a paperback book tour, but I have a few upcoming media appearances and public talks, starting with being the guest today on KUER’s Radio West — that’s Utah Public Radio — talking about the book’s prequel, American Nations. I’ll also be at St. Joseph’s College in Standish, Maine discussing American Character on April 24 and giving a keynote on the same at the Q Ideas conference in Nashville on April 27.

Previous: In Maine, critics fear Trump’s EPA cuts will damage environment, economy
All Articles
Next: How will Trump’s budget affect Maine? Let us count the ways.