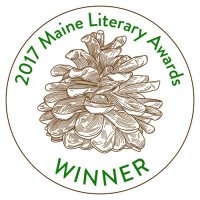 Last Thursday, my neighbor Caitlin Shetterly and I both ventured down to Portland to support one another: we both had books that had been named finalists for the 2017 Maine Literary Award for Nonfiction, and both of us were certain the other would win.

Turns out we were both right.

For the first time in the history of the awards, the judges were deadlocked and, as a result, named us both winners. Caitlin’s book is Modified: GMOs and the Threat to Our Land, Our Bodies, and Our Future. Mine is American Character: A History of the Epic Struggle Between Individual Liberty and the Common Good, which was also a finalist for this year’s Chautauqua Prize. It’s also a sequel of sorts to American Nations: A History of the Eleven Rival Regional Cultures of North America, which won the same award back in 2012.

Congratulations also to the other winners, and thanks to Joshua Bodwell and MWPA for an enjoyable awards ceremony last week down in Portland.

Previous: Bill Cohen on Watergate and today
All Articles
Next: Maine’s senators and the Comey Hearing