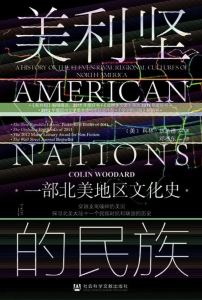 I’m pleased to learn that American Nations: A History of the Eleven Rival Regional Cultures of North America has been available in Simplified Chinese translation in the world’s largest market of all, China.

The new edition — 美利坚的民族：一部北美地区文化史 is its Chinese title — was published by the Social Sciences Academic Press in Beijing in September and is available as a Kindle at Amazon’s mainland China website and in hardcover at bookstores and online retailers there. Strangely enough, all the foreign translations of American Nations have been in East Asia, the others being Korean, Japanese, and forthcoming in complex Chinese in Taiwan.

Social Sciences Academic Press released the simplified Chinese edition of Republic of Pirates and have the rights to translate American Character, though there seems to be some sort of official delay in the roll out of that book. My first book, Ocean’s End: Travels Through Endangered Seas, was also released in China, but by Yiwen back in 2000.