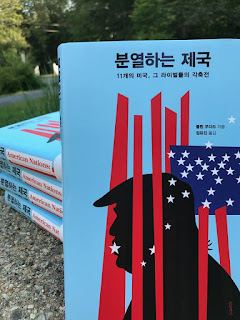 The Korean language edition of American Nations: A History of the Eleven Rival Regional Cultures of North America arrived recently in my mail.

Turns out Donald Trump made the cover, amid illustrative elements that evoke missile launches/prison bars and constellations/speech bubbles. Given the way Trump has heightened tensions on the peninsula via his twitter account, this is probably a savvy marketing move by Geulhangari Publishers. And it looks to be on sale now, at least at this website.

Amazingly, this is the first foreign language edition of American Nations, but Japanese is on its way very shortly too. Pleased to have the book available in South Korea, where I spent a fascinating two weeks on assignment during the “IMF” financial collapse of 1997-98. Even visited the DMZ, which seemed tense even then, despite the presence of a gift shop and golf course on the southern side, which I wrote about for the Bulletin of the Atomic Scientists.

Hope those who can read it enjoy.