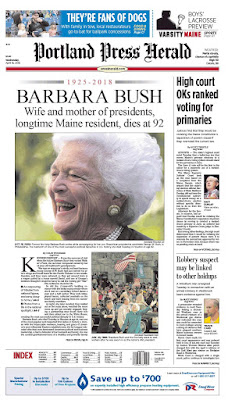 Former First Lady Barbara Bush died last night at 92. I had the privilege of having written her obituary for her summertime local paper, the Portland Press Herald, which you will find in today’s print edition.

The Bushes identified themselves with Texas for political reasons, but through their lives Walker’s Point in Kennebunkport has been the only constant. They got engaged there, held weddings, family events, and high-level diplomatic events, and spent nearly every summer at the compound. It was their only home in the U.S. during the years they lived in Beijing and at the US Naval Observatory and White House. During World War II they also lived briefly in Lewiston-Auburn, while he was training at the naval air station there.

The Press Herald also has a photo gallery of her life up at the website.

Previous: How did ranked choice voting become a polarized, partisan issue in Maine?
All Articles
Next: Record-warm deepwater pouring into the Gulf of Maine, researchers find