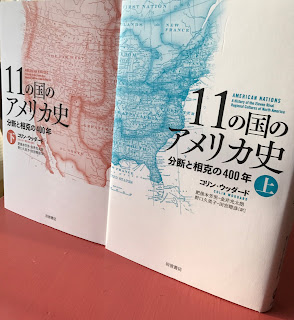 Just as my son’s first grade class was embarking on a unit on Japan a couple weeks ago, what should arrive at our front door but a package from Tokyo containing the handsome new Japanese edition of American Nations: A History of the Eleven Rival Regional Cultures of North America.

Publishers Iwanami Shoten took particular care in creating their edition, which appears in two hardcover volumes, even asking if I could write an updated, Trump Age introduction for the Japanese audience, which I was delighted to do. Co-translator Yoshio Higomoto and was a pleasure to work with. The book looks to have been published in mid-October, though I missed that at the time.

Funny enough, the only other foreign language edition of American Nations is Geulhangari Publishers’ Korean edition, and a simplified Chinese edition is coming soon. Northeast Asia leads the way….

[Update, 1/26/18: Japan’s Asahi Shimbun came to my home to interview me for a feature on the book which appeared this week.]

(Here, for search purposes, is the Japanese title:)