Iwanami Shoten, the Tokyo based publisher, released a beautifully-executed two-volume Japanese language edition of American Nations a year ago, resulting in an enjoyable in-person interview here in Maine with the New York bureau chief of the daily Asahi Shimbun a few months later.

Now I’m headed to Japan to go on tour, so to speak. Like Wham!, but without George Michaels. Or music. Or the stadium-sized crowds of adoring fans. Ok, not much like that, but still fun.

On September 25, I’ll be on a keynote panel at the Asahi Forum 2018 in Tokyo, discussing the populist threat to liberal democracies with fellow presenters Pascal Perrineau (foremost researcher on France’s National Front), Masaru Sato (a former intelligence analyst at the Japanese Foreign Ministry) and Princeton’s Jan-Werner Muller (author of What is Populism?).

If you are missing the Forum — registration is now closed — I will also be presenting on American Nations in two university colloquia that are open to the public.

The first is September 26 at 5 pm at the University of Tokyo’s Center for Pacific and American Studies, at their Kombaba campus. Details can be found here.

The following day, September 27 at 4:40 pm, I’ll be giving the same talk in Kyoto at Doshisha University’s International Institute for American Studies on their Karasuma campus. Details in the attached image: 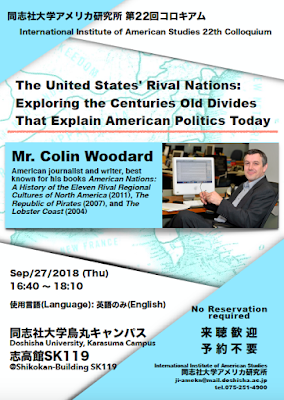 Hope to see you there.

Previous: Speaking on Maine’s identity, history, future in Blue Hill, Sept. 16
All Articles
Next: In Japan