The backstory of the Maine coast and the centuries-old culture of its people.
Request A Signed Book

The Lobster Coast: Rebels, Rusticators and the Struggle For a Forgotten Frontier

This is the Rosetta Stone for understanding coastal Maine, Maine culture, and the political, cultural, and economic divisions that drive policy decisions to this day. An exploration of the state’s unusual history — and its complicated relationship to Massachusetts — and the marine environment that shaped so much about its character.

The Lobster Coast tells a harrowing and little understood saga of war and betrayal, of clashing empires and ethnic cleansing, of an intra-English civil war and a 170 year colonial occupation by Massachusetts of what had been a separate province. These events shaped us as a people and explain some of Mainers’ most impressive virtues and most frustrating faults, as well as the still fraught relationship between this land’s real natives and the rest of us whose families came “from away” at some point in the past four hundred years.

“A thorough and engaging history of Maine’s rocky coast and its tough-minded people.”

“[A] well-researched and well-written cultural and ecological history of stubborn perseverance.”

“Delves deeply and reflectively into the history of Maine and its people.”

“Woodard doesn’t disguise his pique with the forces at work. Maine is worth fighting for – as is any village with distinctly etched local character and community.”

“Lively… While it appears that the future of the lobster is assured — at least for a while — the future of Maine’s lobstermen is not.”

“Woodard writes about his native state and its ungainly mascot with grace and authority, shining a clear light through the mystery and lore that have long surrounded both.”

“Meticulous… For those who received the sanitized version of American history in elementary school, the truth comes as a bit of a shock.” 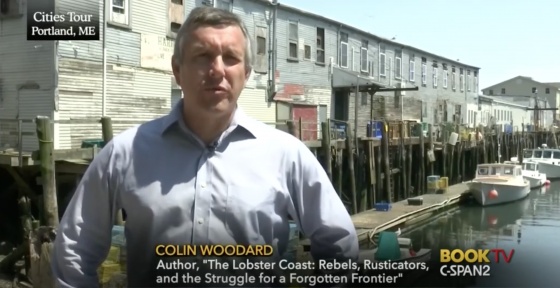