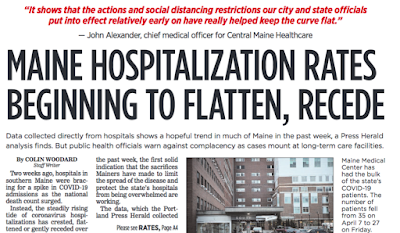 The effort to “flatten the curve” is literally an attempt to reduce the spread of the pandemic so as to prevent a sudden spike in critically ill patients that overwhelms hospitals, their very limited supply of personal protective equipment, and scarce ventilators to keep the most sick alive.

In an exclusive story in today’s Portland Press Herald, I report that that effort here in Maine has worked, at least for now.

I collected confirmed Covid-19 in-patient counts directly from the three largest hospital networks in the state back to the start of the epidemic here, broken out by individual hospital so as to reveal the trend lines in different parts of the state. The very good news: instead of the spike Maine hospitals were bracing for two weeks ago, inpatient numbers have crested and flattened almost everywhere, and had a modest decline in several hospitals, including Maine Medical Center, which has handled roughly half of all hospitalizations in this state.

But, as you can read in the story, while this is welcome news in terms of protecting our hospitals, it’s in no way an indication that we can safely scale back the social distancing measures that have blunted the disease’s spread. And the unfolding crisis in the state’s long term care facilities could undo this positive trend if state officials and health care workers are unable to head it off. Indeed, Maine CDC director Nirav Shah told me last night that’s the scenario that keeps him up at night.

[Update, 5/1/2020: I revisited the data a week later and a week after that; hospitalizations continued to gently fall or plateau.]

Previous: Maine and 37 other states got zero ventilators from the federal stockpile. Why?
All Articles
Next: Allocations of N95 masks from federal stockpile weren’t distributed to states on per capita basis