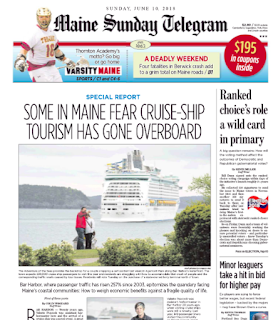 Over the past four months I’ve been at work on a series on the impact of cruise ship tourism in Maine, where most ports of call have a smaller year-around population than the compliment of the larger ships themselves. The results have been appearing in the Portland Press Herald and Maine Sunday Telegram this week, with the final part in today’s paper.

The bottom line for Maine communities: taking an ad hoc, reactive approach to cruise tourism has considerable dangers, but if you plan, prepare, and negotiate properly, you can get the outcomes your citizens want, rather than the ones that will just happen to them.

The full series — Pier Pressure — consists of five articles over three days, and they’re all here for your convenience:

Day 1: “Some in Maine fear cruise ship tourism has gone overboard” (featuring Bar Harbor and the global, business, and historical contexts Mainers should know about.)

Day 1 sidebar: “No discharge fight comes to Acadia region“ (Maine has the weakest marine discharge protections in New England, but there’s a good explanation for why.)

Day 3: “Cruise ships trigger identity crises for a small city in Maine” (on Rockland and solutions generally for Maine ports.)

Photos by the ever-awesome Greg Rec.

Bar Harbor voters decide today if they want to buy an abandoned ferry terminal so as to ensure it becomes a multi-use facility, not a cruise ship mega-pier. [Update, 6/13/18: They approved the purchase by a more than five-to-one margin.]

In an unrelated note, my thanks to peers and colleagues in the Maine media for kindly recommending me to Pine Tree Watch’s list of Maine’s Most Trusted Journalists. The others so honored are my Press Herald colleagues (and, remarkably, immediate newsroom desk-neighbors) Mike Lowe, Eric Russell, and Bill Nemitz; Lewiston Sun-Journal managing editor Judy Meyer; Maine Public’s Steve Mistler, Don Carrigan of WCSH-6/WLBZ-2, and the Bangor Daily News‘s Erin Rhoda, Chris Cousins, and Jake Bleiberg. All of us well know this is not an exhaustive list, as Maine is blessed with a great and varied press corps.

Previous: Talking about Maine’s Ranked Choice Voting odyssey on NHPR, May 17
All Articles
Next: Talking Maine’s 1820 split from Mass. with KQED’s California Report