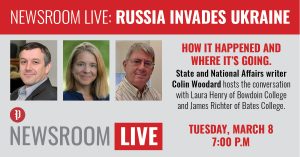 In a single week, Russia’s unprovoked invasion of Ukraine has shattered the post Cold War order, cast Russian dictator Vladimir Putin and his country into Iran-like isolation, set nuclear power plant buildings on fire, and created what is expected to be the largest humanitarian crisis of the 21st century.

How to make sense of what’s happened and the likely roads ahead? I’m leading a virtual panel discussion on March 8th at 7pm with two regional experts, Laura Henry of Bowdoin College (an expert on civil society and public activism in Putin’s Russia) and Jim Richter of Bates College (a Moscow geopolitics expert who now studies the use and abuse of historical memory for political purposes in Eastern Europe.) It’s part of the Portland Press Herald‘s Newsroom Live series, which is free for the paper’s subscribers and well worth the price of a subscription for those who are not. (And you get to support Maine’s newspaper of record to boot.) I hope you’ll join us.

You can find registration details here.

In today’s Press Herald I spoke with Senator Angus King (I-Maine) and Rep. Chellie Pingree (D-ME01) about the conflict, with King warning of cyberattacks against the U.S. and calling Putin the most dangerous person in world history. Rep. Jared Golden (D-ME02) and Sen. Susan Collins (R-Maine) joined them in calling on bans of Russian oil and gas.

I was based in Eastern Europe for most of my twenties as a foreign correspondent and scholar of the region and covered Russia with some regularity and Ukraine occasionally. Ironically, my last dispatches from Ukraine — back in the late 1990s — were from now-occupied Crimea and from Odessa, where there was a showdown between Ukrainian, Russian, and Constantionople-based Orthodox patriarchs.