Last month, the journal Nature published a genetic study on ancestral clustering in North America using the DNA tests of 775,000 Americans, ultimately tied to genealogical information, to reveal the settlement and familial patterns of the continent’s settlement.

Yes, you guessed it: the results match my American Nations map — which is based on post-1492 settlement flows — to what even I found to be a jaw dropping degree.

Remember: American Nations isn’t based on genetics. It argues there are distinct cultural regions – stateless nations even — that were created by separate initial settlement patterns. While obviously this would leave a genetic trace, one wouldn’t necessarily expect it to be super strong, especially in areas that had substantial subsequent immigration or intra-regional migration. The argument is that the underlying values of the initial settlement culture shaped the region, even in the later absence of the people themselves.

But turns out the genetic signature is strong and precise as well. Check out, for instance, how the New England settlement of Yankeedom left a strong genetic trace not just in New England, southwestern New Brunswick, and Upstate New York, but even in Michigan, which was settled in the early and middle 19th century. (That Utah is part of this genetic clustering does not surprise, given the Yankee origins of the Mormon religion and migration, as discussed in the book.) See also – despite the smaller numbers – the Yankee traces in the Left Coast parts of California, Oregon, and Washington.

Notice also the Appalachian streams: yup, they pour right through the lower parts of the “Midwestern” states, as well as the Ozarks and into Oklahoma and the Texas Hill Country, just as American Nations insisted (much to the chagrin of some in the latter regions.)

There’s a lot to unpack here, and am hoping to get a chance to do so in more detail moving forward. [Update, 10/14/17: I finally did just that in an extended story for Medium.] 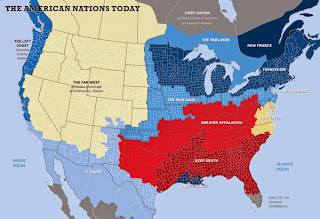