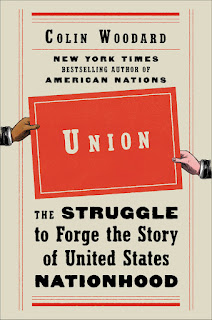 Looking at the calendar, I realize the on sale date for my new book, Union: The Struggle to Forge the Story of United States Nationhood, is less than a month away. While the in-person book tour is pretty much cancelled by the ongoing pandemic, there have been the early reviews, and this seems as good a time to share them.

Publisher’s Weekly says Union is “a fluid narrative that manages to make abstract intellectual concepts tangible. This enlightening and character-driven account will resonate with progressive
history buffs.” (The reviewer also says “Woodard oversells his argument by treating pride in the nation’s constitutional legacy as historically discrete from pride in America’s cultural heritage,” a sentence I’ve been scrutinizing for the better part of a month and still have no idea what they are talking about in the context of this book…but I digress.)

Kirkus calls it “Sturdy American history” and says “Woodard manages to bring all of his disparate biographical threads together in a coherent narrative, using as his apotheosis the life of Woodrow Wilson, Southern-born writer of his own Anglo Saxon–centered History of the American People and proponent of D.W. Griffith’s white supremacist film Birth of a Nation (1915).”

I hope you’ll consider reading it. More details as pub date approaches. Union is available for preorder,  with links to various retailers from Penguin-Random House’s page for it.

Previous: Talking with the AP about individual liberty, the common good, and the coronavirus
All Articles
Next: Library Journal and the American Scholar on Union, my forthcoming book