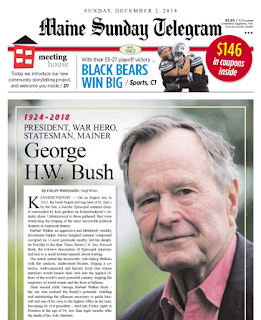 President George HW Bush — who had lifelong ties to southern Maine — died late Friday night at age 94. My obituary for him, the first draft of which was written some six years ago, appears in today’s Maine Sunday Telegram and online here.

A little appreciated fact of the Bush dynasty, the most successful political one in US history, is that it was forged on the shores of Kennebunkport, with a marriage that linked the Walkers and Bushes in a vehicle capable of launching its offspring to the White House more than once.

prepared for the Portland Press Herald.

The couple identified themselves with Texas for political reasons, but through their lives Walker’s Point in Kennebunkport was the only constant. They got engaged there, held weddings, family events, and high-level diplomatic events, and spent nearly every summer at the compound. It was their only home in the U.S. during the years they lived in Beijing and at the US Naval Observatory and White House. During World War II they also lived briefly in Lewiston-Auburn, while he was training at the naval air station there.

I hope you enjoy both pieces.