Glenn Beck, who appears in the opening to American Nations: A History of the Eleven Rival Regional Cultures of North America, discovered the book earlier this month and posted this tweet: 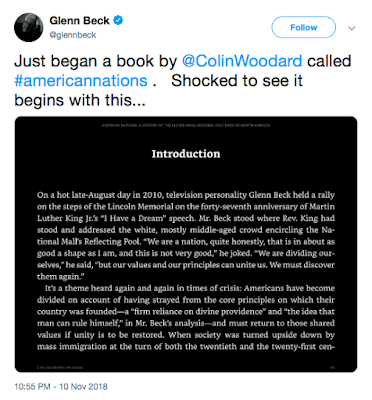 Someone flagged the tweet for me — my Twitter handle is actually @WoodardColin — and I said I hoped he enjoys it. I’m now one of his less than 400 follows, and we engaged in a short direct message conversation about American cohesion, which shows the internet still has its occasional charms.

It appears he’s enjoyed it as he’s gone further in, as it made the top of today’s edition of “Glenn’s Bookshelf,” his list of recommended books at his blog, Glennbeck.com. It’s actually a pretty interesting list, encompassing Orwell, Haidt, Bradbury, and even the master of words-not-action, Ben Sasse. Now if I can just get him to tout American Character….

Previous: On Blackbeard, 300 years after his death, in the New York Times
All Articles
Next: George HW Bush, 1924-2018, an obituary