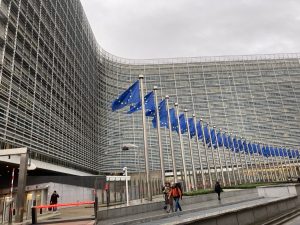 With authoritarianism on the rise — and Russia attacking its neighbors to the East — Europeans rightly wonder if they can still count on the U.S. to remain their primary economic, military and political partner, the rock upon which what was once called the Western Alliance of democratic nations was sustained. I was in Brussels recently to discuss the results of our midterm elections and their implications for all of these questions as a guest of the German Marshall Fund of the United States and the Foundation for European Progressive Studies, a Brussels-based think tank.

I wrote a bit on what European leaders were asking and what my take was in this OpEd for the Maine Sunday Telegram. Bottom line: the U.S. is not out of the woods yet and Europeans would be well advised to be developing contingency plans for a possible world where an administration in Washington is on the side of Putin and other authoritarians.

I was in Europe on a similar mission in 2016 — after the primaries and before that disastrous presidential election — after which I wrote this Telegram OpEd warning what a disaster a Trump presidency would be, however unlikely such an outcome appeared at the time.

Previous: Was there any historic truth to Disney’s Pirates of the Caribbean films?
All Articles
Next: 19 House Republicans voted against McCarthy six times. Guess which American Nations they’re from.