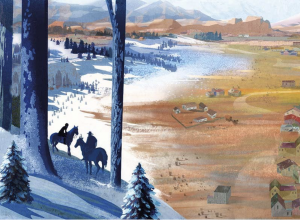 Until a few years ago I didn’t know much about Frederick Jackson Turner beyond his having authored the “Frontier Thesis,” which convinced at least four generations of Americans that their country’s unique identity had been forged on the frontier, when Euro-American settlers confronted the Darwinian environmental forces of the alleged Eden in the Trans-Appalachian west. This thesis was disseminated in Hollywood westerns, mid-century “Cowboy and Indian” television series, and countless novels, essays, and political speeches.

What I didn’t know until researching Union: The Struggle to Forge the Story of United States Nationhood was that Turner very quickly realized his Thesis was wrong. And he spent the last two decades of his life on a magnum opus that argued the American experience was best understood as a struggle between rival sections of the country which themselves resembled European nation states. The book — which remained uncompleted at Turner’s death — would draw on county-level maps of election returns and a variety of other phenomena to illustrate the differences between these sections, including in “the West.” In a certain sense it seems he was trying to write something similar to American Nations.

I wrote about how Turner’s thesis took the country by storm, transformed the way it thought of itself, and persisted even after its author had turned away from it in the new issue of Smithsonian magazine. I hope you enjoy it.

My last print edition story for Smithsonian was this cover story on Blackbeard, though I had a story on the struggle over the American national story in their online space in 2021.

Previous: Launching Nationhood Lab at the Pell Center
All Articles