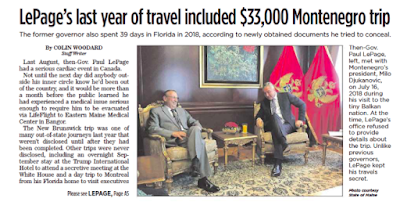 Maine’s erstwhile governor, Paul LePage, often tried to keep his travels secret, even taxpayer-funded trips, like his stays at the Trump International Hotel in Washington or his trade mission to Montenegro last summer, which wasn’t disclosed to Maine’s media until after it was underway.

So as soon as he left office, I requested his entire calendar for 2018 via a public records request. It took four months to get it — and two more months to secure supporting materials on some of the trips — so it’s only now, a half year into a new administration that the public can learn what previous governors would have told them ahead of time.

A summary of what the documents revealed appeared in yesterday’s Portland Press Herald, and is available online here.

For more on how shortcomings with Maine’s public records laws allow public officials to thwart transparency, consider this piece from January.