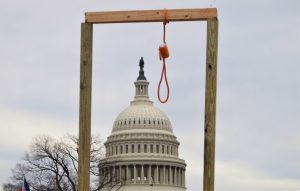 For the first anniversary of the January 6th coup attempt in Washington, I recreated the day in the lives of six Mainers who were at the Capitol complex that day: Senators Angus King (I) and Susan Collins (R), Reps. Chellie Pingree and Jared Golden (Ds); grocery store butcher Kyle Fitzsimmons (in jail and facing 10 count criminal indictment for actions during the attack) and “Putin’s favorite Congressman,” former Orange County, California Rep. Dana Rohrabacher, who moved to York, Maine after losing his seat in 2018 and attended the 1/6 rally (a story I broke in the Press Herald last June.)

The story – partly researched in D.C. and including fresh takes on the events by King and Pingree – was in today’s Portland Press Herald and can be read online here.

I reported on some of these themes just before the holiday break in this interview story with Senator King for the Maine Sunday Telegram. “The idea that it can’t happen here – that’s just not so, and that’s just what’s worrying me,” King told me. “We have a lot of people who are just not committed to the idea of democracy.”

Previous: Senator King’s fears for the survival of U.S democracy
All Articles
Next: Joining the Pell Center