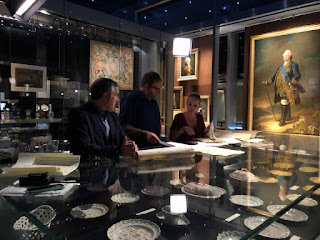 I’ve been in France this week. I can’t say too much about it, except that it involved a television shoot, the Museum of the Freemasons in Paris, and maybe something about a pirate treasure. More on this in the months to come.

[Update, 3/14/20: That’s Josh Gates on my left, host of Discovery Channel’s Expedition Unknown, who was preparing to head off to the Indian Ocean to try to find the pirate Olivier La Buse’s purported treasure. The show, Season 8, Episode 6 — “The Fortune of the Buzzard” — premiered on Mar. 11 and can be found at Amazon Prime, your cable streaming service, and other outlets.]

Along the way, however, I discovered this brilliant contraption in a rural train station in Champagne, which I can share with abandon. Here is a country that takes cultural production seriously.

Also: it’s strange to see Notre Dame in darkness, all approaches closed off for a block around, including bridges, plaza, and subway entrances. A catastrophe, that fire was.