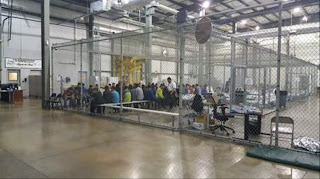 My congressional representative here in Maine is heading to southmost Texas tomorrow to join a score of her colleagues touring federal detention centers where migrant children taken from their parents are being held. Her questions — and the fact that they’re all legitimate ones — illustrate where we’re at as a country: where are the detained girls? where are the detained babies? are reports that caregivers aren’t allowed to touch or hug traumatized children true? Or that kids are being kept drugged to pacify them? how is the government going to reunite children — especially babies — with their families, particularly if the parents have already been deported? are they even going to?

The central message of American Character was that liberal democracies fail when the balance between the two pillars of freedom — individual liberty and the maintenance of the common good — gets too far out of whack. Written in 2015, before Trump was considered a serious candidate, it warned that the US was in danger of falling into authoritarianism for this reason, and that all the warning signs were present.

This week we learned that we’re already there, replete with detention camps for babies and children, border agents effectively kidnapping children to terrorize migrants, and a stunning set of lies and reversals issued from the pulpits of the Trump administration on the issue.

The federation is at a crossroads, and its soul at stake. Let’s hope we pass through in one piece.