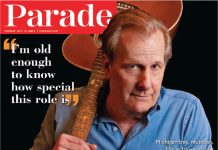 Jeff Daniels has been driving sell out crowds to New York’s Shubert Theater to see his performance of Atticus Finch in Aaron Sorkin’s new adaptation of To Kill A Mockingbird. Parade Magazine, that insert in what remains of America’s Sunday newspapers, interviewed him for this past Sunday’s cover profile.

It’s a compelling profile on a timely topic — Atticus Finch is a lawyer defending a falsely accused black man in 1930s Alabama — and a worthwhile read. But the self-interested reason I’m talking about it here is, at the end, he’s asked his “Fave Read.” His answer: American Nations. “It’s fascinating,” he says in what are the last lines of the feature. “It’s all about how this country developed and why we are the way we are. We’ve never been one nation under God. It was always 11 nations.”

Daniels first mentioned my book in a tweet  November 4th — in fact, the title was the only thing the tweet said. The play opened December 13th, so I want to imagine he picked it up while thinking about regionalism and the Deep South of the 1930s. Or maybe he just wanted an escape. Either way, thanks Jeff for the kind plug.

Politically minded television viewers will remember Daniels’ famous speech in the pilot to Sorkin’s television series, The Newsroom, where he plays a Yankee Republican distressed about the direction of the country, his party and all.

For contrast, the last celebrity to go out of their way to mention the book was the idiosyncratic Glenn Beck.

Previous: Speaking on American Nations, Needham, Mass., June 5
All Articles
Next: How Gov. LePage spent his final year in office