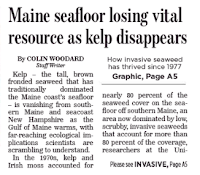 Kelp, a foundation species with a role not unlike that of corals in tropical seas, is vanishing from the coasts of New Hampshire and southern Maine due to the rapid warming of the Gulf of Maine, I reported in Saturday’s Portland Press Herald.

Their disappearance — and replacement by shrubby invasive red seaweeds — means less refuge habitat for commercial fish species like cunner, juvenile pollock and cod, and possibly crabs and lobster as well, although they are as yet poorly studied.

The good news is the excessive temperatures that are wiping out kelp in places like the Isles of Shoals have not yet reached areas beyond Casco Bay, in southern Maine, and will likely take decades to reach eastern Maine, where nearshore waters are considerably cooler. Details in the story.

I’ve been covering climate change and the Gulf of Maine — the second fastest warming part of the world ocean — in some detail. For background, consider starting with this series and perhaps continue with this update from earlier this year.

Previous: Speaking on Maine’s colonial and post-colonial past in Rockland, Nov. 16
All Articles
Next: The Maine nurse saving lives in the Mediterranean