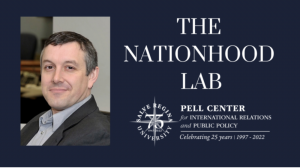 I’m pleased to announce that I‘ve launched a think tank project built on the intellectual foundations of the American Nations trilogy and aiming to help save the U.S. republic and federation, whose fates are inexorably linked.

The project, Nationhood Lab, is based at the Pell Center for International Relations and Public Policy, the think tank established as the legacy of the late Sen. Claiborne Pell, which is itself part of Salve Regina University in Newport, Rhode Island. It’s an interdisciplinary research, writing, testing and dissemination project focused on counteracting the authoritarian threat to American democracy and the centrifugal forces threatening the federation’s stability. Nationhood Lab will deliver more effective tools with which to describe and defend the American liberal democratic tradition and better understand the forces undermining it.

If you come by this site regularly, you’ll be hearing a lot more about the the project, whose own website will be up soon.

I’m taking a hiatus from daily journalism, but you’ll see my work regularly out there. (There’s even a piece on Frederick Jackson Turner and the frontier myth in your current edition of Smithsonian Magazine that, at this writing, isn’t yet online.) And though I’ll be in Rhode Island and on the road a lot more often this year, my family’s still based in Maine.

Very excited to be kicking off this initiative and look forward to many of you coming along for the ride.