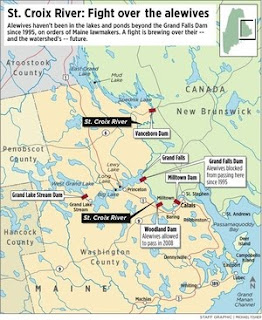 In Saturday’s Portland Press Herald, I have a story from the eastern borderlands of Maine and the United States, where a pulp and paper company has announced it wishes to surrender ownership of two dams, a process that normally would result in their gates being left open, permanently lowering the water level of the lakes they impound.

This, as you’ll read, is an alarming prospect to the communities around East Grand Lake — Maine’s eighth largest — which could fall by six feet, turning waterfront property into interior lots and playing havoc with the local tax base, tourism economy, and ecosystem. Canada’s not happy either, and they own half the lake bed and the land under one half of the most prominent of the dams. More, as always, in the story.

I previously wrote about Eastern Maine dams when the state Department of Environmental Protection messed up during the federal relicensing process (again) and also during a debate about allowing the passage of (native) alewives up the river system, and its possible effects on (non-native) smallmouth bass.