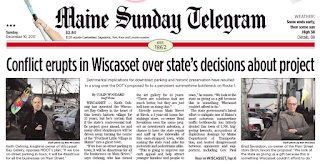 The state has a plan to mitigate Maine’s most infamous summer traffic bottleneck, the one in the historic village of Wiscasset, where US Route 1 passes down Main Street to and from the only bridge for miles that crosses the Sheepscot River, linking the Boothbay and Bristol peninsulas with points South.

As you can read in my story in this week’s Maine Sunday Telegram, the town is now opposed to the project and is suing the Maine Department of Transportation to stop it, alleging that it is violating town ordinances and state law and that it changed the project after receiving approval. Among other things, the DOT suddenly decided not to use federal funds, which were to pay for 80 percent of the project’s $5 million price tag, thereby avoiding historic preservation requirements. And Gov. Paul LePage threw fuel on the fire with blustery notes to constituents telling them he’s had enough of Wiscasset’s obstruction and wishes he could put a viaduct right through the center of the village, carrying traffic up and over to the bridge as it does in Bath. And local businesses fear it will destroy the village.

But others support the project, including the select boards of neighboring towns and some business people, who believe the project will revitalize Main Street, not destroy it.

Read on for details.