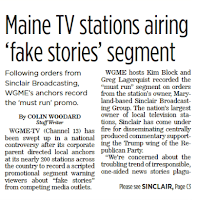 Over the weekend, a montage went viral that featured dozens of local television anchors at Sinclair Broadcasting stations across the country reciting the same promo about their concern over “fake stories” being carried by other (unnamed) media outlets. The anchors expressed their concern about “the troubling trend of irresponsible, one-sided news stories plaguing out country” and denounced “some media outlets” for publishing “these same fake stories…without checking their facts first” and for using “their platforms to push their own personal bias and agenda to control exactly what people think.”

As I report in today’s Portland Press Herald, WGME-13, southern Maine’s CBS affiliate, was no exception, with anchors Kim Block and Gregg Lagerquist producing the requisite segment, which ends with the observation “This is extremely dangerous to democracy.” The promo also runs on Sinclair’s local FOX affiliate, WPFO-23. (Here’s a link to the clip.)

Critics noted that the Sinclair stations themselves have a troubling reputation for running one-sided, pro-Trump opinion segments and nightly “Terrorism Alert Desk” updates produced at their Maryland headquarters and distributed on a “must run” basis to all of their nearly 200 local stations’ newscasts. They’re also currently seeking Trump administration approval to buy dozens more stations nationwide. More details in the story.

I last wrote on Sinclair and WGME last summer, when the chain was under fire for “must run” segments featuring a former Trump aide.