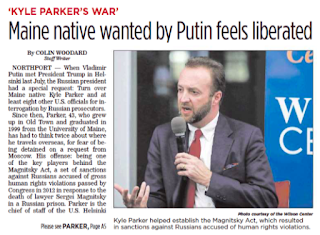 In July,  wrote about how a guy from Maine wound up on Vladimir Putin’s list of Americans he’d like turned over for interrogation, a request he made of President Trump at this past summer’s summit in Helsinki and one that – to widespread horror – Trump appeared to entertain.

Kyle Parker, raised in Old Town, educated at the University of Maine, was back in Maine this month, speaking to the Midcoast Forum on Foreign Relations about the legislation he championed that Putin so hates: the Magnitsky Act. I caught up with him at the event and shared his thoughts on the Act, why it’s effective, why Putin doesn’t like it, and on growing up in Maine in Monday’s Portland Press Herald.