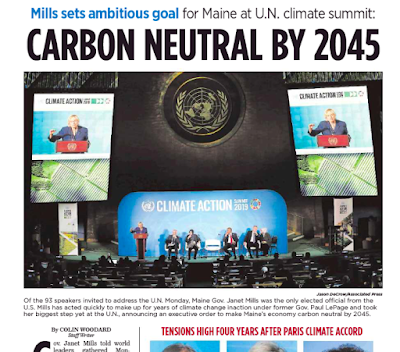 This week, as the Trump administration has become mired in impeachment proceedings, I’ve been knee deep in climate coverage for the Portland Press Herald, much of it the result of Maine Governor Janet Mills being invited to speak before the UN Climate Action Summit in New York.

Mills, who took office in January, was the only official from the US among the 93 people invited to speak before the General Assembly at Monday’s summit. She was also the first sitting Maine governor to address the body.

Here’s what she said to the world there. (Please follow Maine’s lead.)

Here’s what she did the following day. (Meeting lots of foreign officials who now know they’d best spend their time speaking to state and city leaders, rather than the US federal government.)

Last week, I wrote updated about how climate change is affecting the Gulf of Maine and how Maine is finally responding after years of inaction under former governor Paul LePage, a volatile Trump-Tea Party-wing Republican.

Tomorrow’s story is also on climate change, which makes six in a row. There may be a pattern here.

Previous: Covering Climate Now and the Gulf of Maine
All Articles
Next: Maine launches its Climate Council, charged with slashing emissions