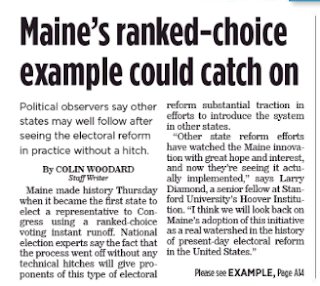 This month, Maine became the first state in the nation to hold its federal elections via Ranked Choice Voting, an instant runoff system intended to remove the “spoiler problem” from elections and theoretically, encourage comity and moderation in political candidates. In the state’s Second U.S. House District the system was activated after none of the four candidates had a majority of first round votes, and voters made Democrat Jared Golden the winner in their second choices.

Defeated incumbent Bruce Poliquin has declared victory, nonetheless, and is challenging the whole process in federal court on (what experts say are spurious) constitutional grounds, but from a technical perspective the vote went off without a hitch. So what does that mean for the prosoects for Ranked Choice Voting in other states? I talked to a bunch of national experts to answer that question, and you can read what the head to say in this week’s Maine Sunday Telegram (or online here.)

This spring, I laid out the whole saga of Maine’s effort to adopt ranked choice voting for Politico Magazine, and then, for the Telegram, asked how a theoretically neutral electoral reform intended to reduce partisanship and polarization has become mired in polarization and partisanship, with Maine voters and legislators sharply split on party lines.

Previous: The 2018 midterms, the American Nations and Washington Monthly
All Articles
Next: How LL Bean Got Big in Japan