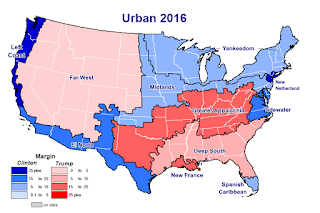 One counter-argument I often hear in regards to the political effects of the American Nations is that regionalism isn’t important, that the salient divide in American politics is actually between rural and urban voters.

I crunched the numbers for the past three presidential elections, revealing and comparing not only how rural and urban voters behaved in each of the United States’ eleven regional cultures, but even how specific categories of counties voted, from the major metro core counties to the most remote and rural.

I’ve released the results, posted with maps and tables galore, over at Medium as the latest installment of my ongoing American Nations-powered series, “Balkanized America.” They show that regionalism overwhelmingly trumps population density when it comes to political behavior, with people from each class of county exhibiting enormous differences between “nations.”

In five of the regional cultures that together comprise about 51 percent of the U.S. population, rural and urban counties always voted for the same presidential candidate, be it the “blue wave” election of 2008, the Trumpist storm of 2016, or the more ambiguous contest in between. In Greater Appalachia, the Deep South, Far West, and New France, rural and urban voters in aggregate supported Republican candidates in all three elections, whether they lived in the mountain hollers, wealthy suburbs, or big urban centers. In El Norte, both types of counties always voted Democratic, be they composed principally of empty desert or booming cityscapes.

I’m not saying urban/rural electoral divides don’t exist – they do in every nation, from France to India – but their predictive power is often greatly exaggerated. And in the case of US presidential elections, they are a grossly inadequate means to interpret the results.

[Update, 11/10/17, 0931: An unrelated programming note: C-SPAN is airing their special Portland, Maine program tonight, Nov.10, at 7:06 pm, including segments with me on two of my other books, American Character and, later, Lobster Coast.]
Previous: Maine member sues Trump’s voter fraud commission for access to proceedings
All Articles
Next: Bill to “fix” problems in and around Acadia National Park moves forward on Capitol Hill