Republic of Pirates fans take note: 2018 has been the 300th anniversary of Woodes Rogers’ landing at Nassau, marking the formal — if tumultuous and uncertain — end of the pirate republic, and Thursday was the anniversary of Blackbeard’s death in a pitched battle with sailors of the Royal Navy.

I’m thankful that the New York Times opinion editors let me share my thoughts on the significance of this occasion — and the reasons for Blackbeard’s uninterrupted popularity — in Friday’s paper. It’s a nice bookend to the tricentennial, a year I started in Bath, North Carolina, talking about the pirate and his death on an iced-in dock with Rogers’ unlikely descendent, actress Hilary Duff.  Enjoy the piece. 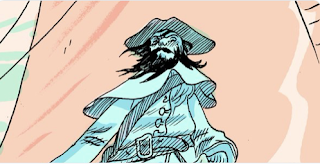 Also on Thursday back in the U.K, the Bristol Post ran this piece on Blackbeard’s real name (it’s Edward Thatch, not Teach) based on an interview they conducted with me a few years back. Thatch’s family was from the Bristol area, even if the latest evidence — from researcher Baylus Brooks — indicates he himself was likely born in Jamaica.

I last wrote on Blackbeard for Smithsonian a few years back, sharing new research by Mike Daniels on his final capture.