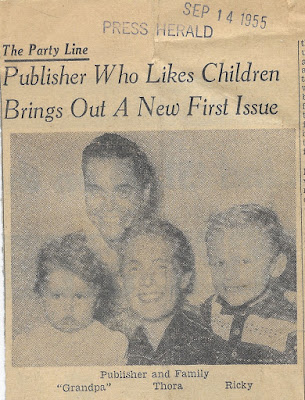 In September 1955, Maine’s Portland Press Herald ran a soft feature on a local guy making good. “Publisher Who Loves Children Brings Out A New First Issue” profiled area resident George Lincoln Rockwell, who had just launched U.S. Lady, a glossy magazine to support the wives of servicemen as they and their families relocated with them. Understandably, his wife Thora and her children featured in the piece and in the photograph illustrating it (above.)

It’s a chilling photo because after the magazine failed, Rockwell turned to radical politics, founded the American Nazi Party, and travelled the country calling for the gassing of Jews and other “traitors” and the mass deportation of African Americans before being killed with a sniper rifle by one of his followers.

Thora Halgrimsson, a member of one of Iceland’s most powerful families, had left him years before, returning to her native country with their children and her son by a previous marriage. Her second husband, Bjorgolfur Gudmundson, adopted the children and rose to become Iceland’s richest man, the chairman of the recklessly aggressive Landsbanki investment bank, and owner of the British football club West Ham United. He has been under a variety of fraud investigations ever since Landsbank’s collapse helped bring down Iceland’s economy in 2008.

When he learned in 2005 that a biographer had written a chapter in a forthcoming book with details of Thora’s marriage to Rockwell, Gundmundson — who owned the publishing house — had the copies pulped and compelled the author to expunge most of the material. (“It was irrelevant to the whole story,” he told The Observer.) When the Reykjavik tabloid DV broke the Icelandic media’s silence on the revelation and published an article on the missing chapter, Gudmundson tried to buy the paper and shut it down.

I came across the clipping (and Icelandic backstory) while researching this week’s feature on Rockwell’s deep ties to Maine in the Maine Sunday Telegram, which include summers in the Boothbay region, graduating from Hebron Academy, starting businesses in Portland and Boothbay Harbor, living in Falmouth, Lewiston, and Bailey’s Island, and serving at Brunswick Naval Air Station. I hope you’ll read it.