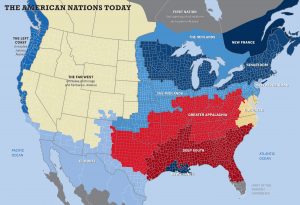 For those with an interest in the regional model set forth in American Nations: A History of the Eleven Rival Regional Cultures of North America, here are population figures for the U.S. portions of each of the nations as per the 2020 census and the rate of growth or loss for each since the 2010 census.

(Thanks to Tova Perlman and her colleagues at the cultural geospatial consultancy Motivf for the calculations.)

More demographic and economic information to come, but observe that Yankeedom has the slowest growth of all the U.S. portions of these regional cultures (probably true of Canadian Yankeedom as well, I’d speculate) while the Far West is the fastest growing of the major U.S. cultures and the Spanish Caribbean’s South Florida enclave the fastest of all.

Motivf and I last posted American Nations data on vaccination rates by nation. Working with other partners I’ve also posted data on rural vs urban voting patterns and the 2016 presidential and 2020 presidential elections.

Previous: Presenting at Cornell IOPGA’s Summit on Democracy, NYC, May 24
All Articles
Next: Where Sen. Susan Collins stands on gun control negotiations