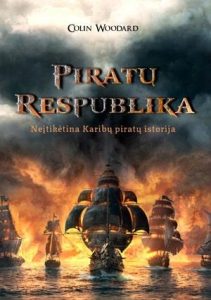 Have you been waiting for a Lithuanian edition of The Republic of Pirates? Of course you have. We all have. And now the waiting is over.

Leidykla Briedis, the Vilnius publishing house, released the book last month under the title Piratų Respublika. Neįtikėtina Karibų piratų istorija. This is the ninth foreign edition of the book to date, the others being for the United Kingdom, Spain, Denmark, Poland, Hungary, Brazil, Taiwan, and China. Japanese is coming later this month and Romanian later this year.

As a longtime Eastern Europe-based foreign correspondent, I am genuinely excited the book is out in Lithuania as well as so many of its neighbors. Would be fun to go on tour there, as I expect Vilnius has changed a lot since I last visited in 1994!