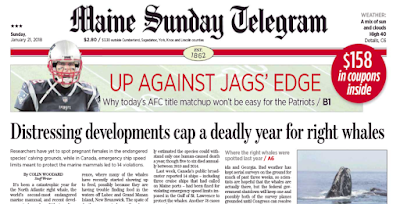 The disastrous year for the North Atlantic right whale, the world’s second most endangered mammal after the species’ Pacific cousin, doesn’t appear to be abating. After seventeen of the whales have been found dead since June in New England and Atlantic Canada — more than three percent of the total worldwide population of 450 — scientists warned the species will be extinct in another 23 years if something doesn’t change.

But the most recent news only increases anxiety about the whales: a series of speeding violations by ships in a zone of the Gulf of St. Lawrence set up by Canada to protect the whales and, separately, an absence of calf sightings on the whales calving grounds off Georgia and northeastern Florida.

I have the full story on these and other developments in the whales’ odyssey in this week’s Maine Sunday Telegram.

I reported last summer for the Press Herald about the right whale die off, with some additional background about the species and how its been monitored. I’ve reported on the species on and off for  a decade for other publications, context you can find by starting here.