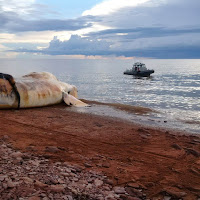 The North Atlantic right whale, the world’s second most endangered mammal after the species’ Pacific cousin, has has a disastrous year here in the northwest Atlantic. Sixteen of the whales have been found dead since June in New England and Atlantic Canada, more than three percent of the total worldwide population of 450.

Scientists who study the whales met in Halifax this past weekend and warn that the animals will be extinct in just 23 years if present trends continue. They have recommendations as to what should be done and say it should be done now, not after further study. And you can read all about it in my story in yesterday’s Portland Press Herald.

I reported earlier this summer for the Press Herald about the right whale die off, with some additional background about the species and how its been monitored. I’ve reported on the species on and off for nearly a decade for other publications, context you can find by starting here.

A final housekeeping note: for those following President Trump’s voter fraud commission, I had this update, wherein Maine’s member blasts the group’s secrecy and evokes the law to demand he be kept in the loop on its activities.