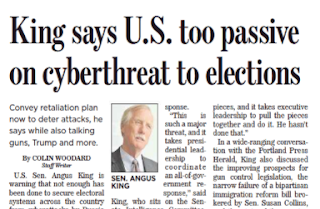 Senator Angus King, I-Maine, came by the Press Herald newsroom last week for a wide-ranging, on-record conversation with myself and my colleagues about everything from the state of the immigration debate to prospects for modest gun control legislation on Capitol Hill and even why he’s not interested in joining the Democrats, who he caucuses with.

But the most pressing issue he wanted to talk about was the ongoing threat posed by Russian cyber attacks on our election infrastructure, which he says remain insufficiently addressed ahead of the 2018 midterms. The President, he argues, has not only declined to marshall a cross-government response, he’s made matters worse by encouraging the public to regard Russian attacks as a hoax.

It’s all in the piece, which ran in yesterday’s print edition.

For more background on King’s concerns with attacks on our election systems, there’s this piece from an extended interview I did with the senator last year. On Maine’s system — relatively invulnerable to such attacks because of its intentionally low-tech design — start with this interview with the state’s top election’s official, Secretary of State Matthew Dunlap.

Previous: Dunlap, other top state election officials received classified briefing on threats to voter systems
All Articles
Next: Speaking on the crisis in the oceans and Gulf of Maine, Portland, Mar. 7