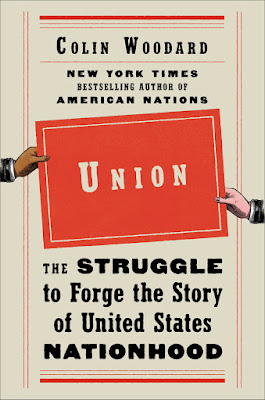 I spent a fair part of 2019 working on my sixth book and, to close out the year, am pleased to be able to share its cover art, preliminary description, and pre-order pages. It’s called Union: The Struggle to Forge the Story of United States Nationhood; it’s the third part of an informal trilogy that started with American Nations (and continued with American Character); and it’s out with Viking Press in June 2020.

If American Nations showed that there has always been not one America but several, Union tells the tale of how 19th century Americans created — and viciously fought over — a national narrative to paper over this problematic condition. Told through the lives of several key figures in the struggle, it shows that our federation has long been a battleground between civic- and ethno- nationalist explanations of our national origins, purpose, and identity. Trumpism’s roots, sadly, run as deep as American ideals late 20th century Americans almost unanimously embraced.

Also, Woodrow Wilson was even worse than you think.

I’m a champion of local, independent bookstores, so hope interested parties can order the book from their favorite. But for reference — and for those who live in bookstore deserts — here’s the Amazon page (with Kindle edition) and Barnes & Noble.com one (with Nook edition).

Previous: In Boston, talking about American nationhood and its problems with The American Question.
All Articles
Next: Don Gellers, victim of state sponsored conspiracy, receives full, posthumous pardon in Maine