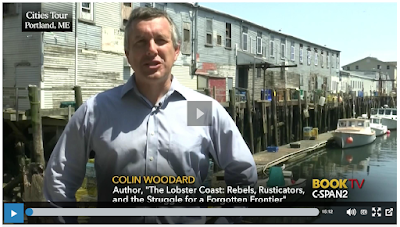 The indefatigable team at CSPAN’s City Tour came to Portland, Maine this summer and the segments they produced are airing this weekend, spotlighting our little city.


I was pleased to record two separate interviews with them, one on Lobster Coast and the historical and cultural background to Maine’s lobster fishery, the other on American Character: A History of the Epic Struggle Between Individual Liberty and the Common Good (from Portland Head Light.)

Here’s the broadcast schedule for those. I’ll post links to each segment as they come available.

If you’re interested in American Nations, my full talk at Iowa State was carried on CSPAN-1 a couple of years back and is available here.
Previous: American Nations, now in Korean
All Articles
Next: Scientists say Atlantic right whales on trajectory to be extinct in 23 years