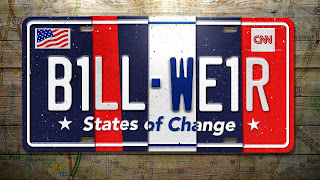 I’m pleased to be one of the guests on a CNN special airing this Saturday, June 3 at 9 pm Eastern, where I’ll be talking about the regional cultures outlined in my book, American Nations: A History of the Eleven Rival Regional Cultures of North America, and how they help explain the 2016 election.

The program is entitled “States of Change” and is hosted by Bill Weir, who travelled the world to create and host the CNN travel/history/culture series “The Wonder List,” now entering its third season. It explores a nation divided and is a companion broadcast to his one-hour digital documentary  special, “Bill Weir: States of Change – Homecoming,” which also features yours truly and streams on CNNgo and all CNN apps and devices starting this Friday.

More details here. [Update, 6/4/17: As would-be viewers discovered, the show was pre-empted at the last minute on account of the London Bridge terrorist attacks; the show is taped, so it will be getting a rescheduled air date.] [Update, 6/11/17: The show had its premier last night; I write about it here.] [Update, 6/20/17: You can now see the segment online here.]

My last contact with CNN was just last week, for a web story on the Caribbean pirates.

Previous: Bill Cohen on Watergate and today
All Articles
Next: Maine’s senators and the Comey Hearing