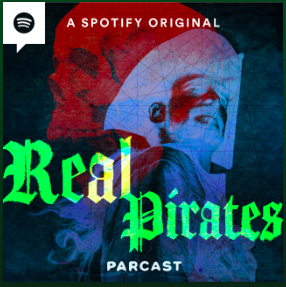 Bristol, England-based podcast producers Noiser recently reached out to interview me for an extended series they’re doing for Spotify on the golden age pirates whose story I reassembled in my book The Republic of Pirates: Being the True and Surprising Story of the Caribbean Pirates and the Man Who Brought Them Down. Now the series — Real Pirates — has debuted over at Spotify and in a few short days has risen to be the site’s #3 podcast in the United States and #25 in the United Kingdom.

The series has kicked off with “Turning Pirate,” an episode focused on the first founder of the pirate republic at Nassau, Benjamin Hornigold, the man who would bring Blackbeard into piracy. Its produced by Macalister Bexton, Addison Nugent and Katrina Hughes. (It’s a Spotify Original, which means you probably won’t find it on iTunes or other platforms, at least for now.)

I hope you enjoy. And if you want to learn more, please consider the book, which is available in both North American and UK and Commonwealth editions, as well as a range of foreign languages.