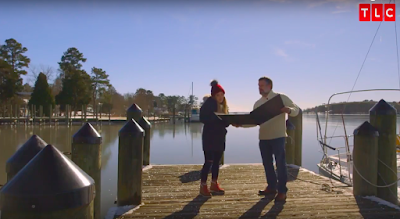 In an unlikely development, I recently returned to Blackbeard’s Bath, North Carolina haunt to chat with actress Hilary Duff about one of her ancestors, the man responsible for the pirate’s death 300 years ago this fall.

Duff was being whisked around the world for what became this week’s episode of the cable television program “Who Do You Think You Are?” on TLC.; I was there as author of The Republic of Pirates, which tells the story of how Blackbeard came to be in Bath and how Duff’s ancestor organized the expedition to kill him. The segment was shot on an unusually cold January morning — so cold in fact that Bath Creek had frozen over, making boating impossible, so we spoke on a dock surrounded by

Here’s an extended clip of our conversation. The full episode — S9:E4 — is available here to US cable subscribers with TLC in their package.

Thanks to the excellent team at Shed Media for an enjoyable mid-winter dive into piracy.

I’ll next be talking piracy in Nassau, site of the Bahamian pirate republic, in mid-July, on the occasion of the 300th anniversary of the pirates’ downfall. Stay tuned for details. My next public talk is at the Chautauqua Institution in far western New York state July 3, on American Character.

Previous: Speaking at the Chautauqua Institution, July 3
All Articles
Next: Talking Maine’s 1820 split from Mass. with KQED’s California Report