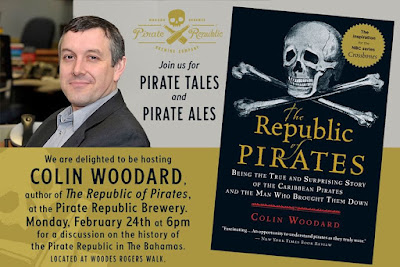 My third book, The Republic of Pirates: Being the True and Surprising Story of the Caribbean Pirates and the Man Who Brought Them Down is the most comprehensive, back-to-the-archives account of the most famous pirate outbreak in history, the one that’s responsible for virtually all of our pirate pop culture imagery and the inspiration for the pirates of Robert Louis Stevenson and the Walt Disney Company.

That pirate gang was able to become as fearsome as it did because they had a fortified base, a pirate republic if you will, at Nassau in the failed British colony of the Bahamas, which had been sacked and destroyed by the enemy in the War of Spanish Succession. Blackbeard, Sam Bellamy, Calico Jack Rackham, Stede Bonnet, Mary Read, Anne Bonny and many other infamous pirates gathered together there, protected by the repurposed fort, supported by a population of rogues, escaped slaves, and opportunists, and supplied by the unscrupulous merchants of Harbour Island. Its a remarkable tale from start to finish, and the book has inspired an NBC series (Crossbones with John Malkovich and Kate Foy) and Ubisoft’s Assassin’s Creed IV: Black Flag, which recreated early 18th century Nassau in great detail (and for which I served as a historical consultant.)

So it’s with great pleasure to announce that on Monday, February 24, I’ll be speaking on the pirates in Nassau at the Pirate Republic Brewery Taproom, located, appropriately enough, on Woodes Rogers Walk on a site that would have been smack in the middle of the old pirate village. It’s at 6pm and free and open to the public. Parrots optional.

Previous: Speaking (a lot) about most everything at Star Island’s Natural History Week, June 20-27
All Articles
Next: Colony, Chapter 2: Maine and Massachusetts were different from the start