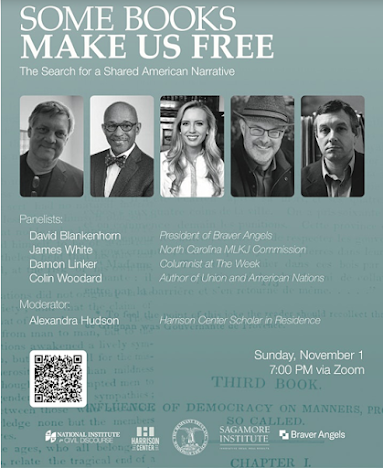 This coming Sunday, November 1, I’ll be joining a virtual panel to discuss “The Search for a Shared American Narrative,” which in its original 19th century guise, is the topic of my latest book, Union: The Struggle to Forge the Story of United States Nationhood.

The panel, which kicks off at 7pm Eastern, is part of the America’s Public Forum series on American national identity in the 21st Century and is convened by the Indiana-based Harrison Center, Sagamore Institute, and Braver Angels, as well as the National Institute for Civil Discourse and moderated by Alexandra Hudson, a scholar in residence at Harrison, an arts-as-development organization in Indianapolis.

It’s free and open to the public, but as with most virtual events, you need to pre-register.

COLIN WOODARD is a New York Times bestselling author and award-winning journalist. He is the author of six books that have been translated into a dozen foreign languages and inspired an NBC television drama. He is currently State and National Affairs Writer at the Portland Press Herald and Maine Sunday Telegram, where he won a 2012 George Polk Award and was a finalist for a Pulitzer Prize in 2016. He is a contributing editor at POLITICO and his work has appeared in The New York Times, The Washington Post, The Economist, Smithsonian and dozens of other major publications.