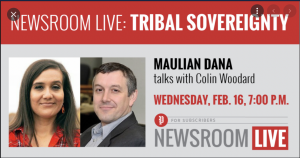 As readers of my 30-part Portland Press Herald series “Unsettled” know, Maine has treated the state’s Indian tribes horrifically within living memory, denying tribal people the right to vote, serve on juries, or to hunt and fish on their own lands; allowing those who murdered Indians to go unpunished; and even running their attorney out of the country as part of a state sponsored conspiracy organized by the Attorney General and the State Police.

Now there’s a powerful legislative effort to reform the current relationship between the state and tribes, which are denied many of the sovereign powers and federal benefits afforded most of the United States’ other 570 federally recognized tribes. Background on that development is provided in this recent Sunday feature and the events at the hearings on the key reform bill and Gov. Janet Mills’s more modest alternative can be fond here. (Also, from today’s paper, this dispatch on two more relevant bills.)

Amid all this I sat down recently (and virtually) with the ambassador-at-large for the Penobscot Nation, Maulian Dana, to talk about the sovereignty reform effort and answer reader’s questions. You can watch the discussion here at the Press Herald‘s website.