Happy 2019 everyone, and happy birthday to this blog, which started 10 years ago today with this post from Reykjavik, where I was starting a reporting trip in the wake of that country’s near-total (but ultimately short-lived) financial meltdown in the midst of the 2008 economic crisis. 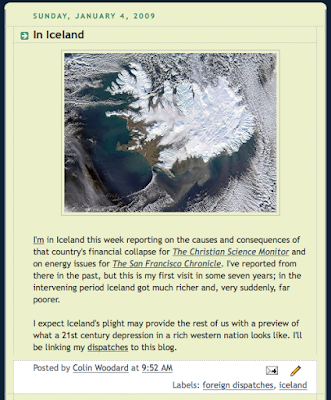 Reflecting on the decade recorded on this blog, the major changes: (a) parenthood and (b) a not unrelated shift away from primarily foreign correspondent work to North American coverage; (c) becoming a staffer at Maine’s largest newspaper (where we won a big award and was a finalist for another); (d) the writing, completion, publication, and dissemination of American Nations and its successor, American Character; (e) the continued life of Republic of Pirates, via an NBC television show, an Ubisoft video game, and a variety of foreign translations; and (f) a reduction in the frequency and geographical scope of my travels — not-so-worldwide Woodard, as the decade turned out!

Here’s to an interesting second decade.