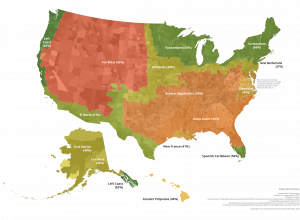 As the delta variant has overtaken the United States, refilling hospital intensive care units and killing many thousands of each week, Americans are once again seeing the profound effects of centuries-old regional differences in attitudes toward individual liberty, the common good, and the possibility or even desirability of competent, technocratic governance. At this writing, the country is facing a devastating pandemic resurgence because large numbers of people are refusing to get vaccinated against Covid-19, and those people are concentrated in certain U.S. regions.

Earlier in the pandemic, regional differences — and the abdication of federal leadership by then-President Trump – made the United States ground zero for the crisis, as elected officials and large numbers of citizens across the southern tier of the country mobilized not against the deadly virus, but against public health measures. This resulted in enormous regional disparities in the initial adherence to lockdown recommendations in the spring of 2020, in masking adherence, and in per capita new case and death rates ever since. This summer we’ve seen the same patterns in vaccination rates, as people in certain regions of the country resist protecting themselves, their families, and the country at large from a deadly and highly-contagious respiratory disease. The geography of the pandemic has followed lines that will be immediately recognizable to readers of American Nations and its sequels, American Character and Union.

Distinct regional cultures make up the United States, cultures originating in the differences between the different Euro-American colonial projects on the eastern and southwestern rims of what is now the United States and the mutually
exclusive swaths of the country their descendants first colonized. The cultures – described in my 2011 book, American Nations: A History of the Eleven Rival Regional Cultures of North America and explained in digested form here and here – don’t respect state or even international boundaries, and their enduring effect on history, social attitudes, elections, and public health can only be seen at the county level.

The fundamental philosophical divide between these regional cultures is over the question of how best to organize American society, a divide with profound consequences when responding to a highly-contagious disease.

Three large and important ones have cultures that see freedom’s path lying almost exclusively with individual liberty and personal sovereignty. Greater Appalachia was founded by settlers from war-ravaged borderlands in the British Isles. They brought their warrior ethic and deep commitment to personal sovereignty into the United States, along with a distrust of institutions, especially governmental ones. The Deep South was established by oligarchic slave lords from the West Indies, and championed a form of classical republicanism wherein “democracy” was a privilege for the few and servitude or slavery the lot of the many and society was explicitly organized around the interests of those on top. Finally, in the Far West, environmental factors meant settlers were dependent on and directed by the federal government and major corporations – powerful institutions that often exploited them; the ethos is libertarian-inflected.

By contrast, there are four “nations” that place a greater emphasis on the common good and the need to sustain and protect a free community. Yankeedom, which constitutes much of the upper Midwest and New England, was settled by religious congregations that prized community and individual self-denial on behalf of the common good. New Netherland, the modern-day New York metropolitan area, has a dedication to free expression and multiculturalism that stemmed from the Golden Age Amsterdam’s commitment to globalization. On the Left Coast, New Englanders and Appalachian settlers combined to create a culture with both Yankee utopianism and Appalachian individualism. The Midlands was first founded by English Quakers who believed in humans’ inherent goodness and welcomed people of many nations in the early Colonial period; it spawned the culture of Middle America, which is communitarian, even as it is skeptical of top-down government intervention. (First Nation, confined in the United States to sparsely populated parts of northern and western Alaska, is the most communitarian of all.)

That leaves three in-between regional cultures: El Norte, the far-flung borderlands of the Spanish-American empire, New France (in the U.S., a small section of southern Louisiana); and Tidewater, founded by the younger sons of the southern English gentry trying to replicate the semi-feudal society of the English countryside, but now transforming into something more Midlands-like due to the massive presence of the federal government in D.C. and the Hampton Roads areas. (There are two additional parts of the U.S. that fall outside these eleven nations: southernmost Florida, which is part of the greater Spanish Caribbean space, and Hawaii, which is part of Greater Polynesia.)

With the help of Nationhood Lab collaborators Motivf, the Alexandria, Virginia-based cultural consulting firm, we calculated the per capita vaccination rates for each of these “nations” as of both June 15 and August 15 of this year — a critical period in which the threat of the delta variant was known, but regional vaccination disparities did not dissipate. The results were very much as American Nations would predict.

The communitarian nations had the best performance in both time frames, some of them with rates nearly twice that of some of their individualistic counterparts. In mid-August, for instance, the Left Coast had vaccinated 62 percent of all its citizens (regardless of age), New Netherland 57 percent, Yankeedom 56, and the Midlands and First Nation 49. These “nations” included or controlled all the states with the best full vaccination rates in mid-September too which were, in order, Connecticut, Vermont, Maine, Massachusetts, Rhode Island (all Yankeedom), New Jersey (Midlands/New Netherland), Maryland (Midlands dominating Tidewater), and Washington (Left Coast dominating Far West), as per the New York Times‘ trackers. In Yankeedom in particular, even Republican governors have behaved in a broadly communitarian manner, supporting public health advice — including those leading Vermont, Massachusetts, and New Hampshire; this is because they are all Yankee Republicans.

The “in between” nations were generally in-between, with El Norte, a region where the old patron-peon system bound communities together in frontier conditions, at 51 and Tidewater — once libertarian, now not so much — at 41.

The regional cultures where individual liberty is valued above the common good have performed the worst, with the Deep South trailing the nation with a overall vaccination rate of just 38 percent and Greater Appalachia at 39 percent. The Far West, where a libertarian ethos was often tempered by the need to cooperate in frontier conditions — and by the presence of the highly communitarian Mormon enclave — the rate was 45 percent, just a few points under the worst performing of the communitarian nations. The Deep South is where you find governors like Florida’s Rick Desantis, Texas’s Greg Abbott, and Tate Reeves in Mississippi siding with Covid-19 by trying to stop school districts, localities, and/or businesses from imposing mask or vaccine mandates. Their declared reasoning: protection of personal freedom.

The situation hasn’t really gotten any better over time. The following map, for comparison, shows the vaccination rates on June 1, 2021, after the danger of the delta variant was clear. In most cases the gap between the communitarian and individualistic regions actually grew slightly, rather than shrank, in those critical two and a half months. 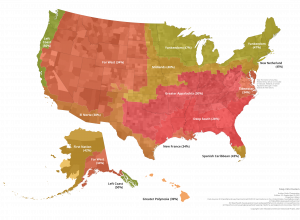 Unfortunately for the communitarian regions, the U.S. Constitution doesn’t allow states to seal themselves off from one another the way Canadian provinces did, and new mutations and variants will continue to grow and evolve so long as tens of millions of Americans remain unvaccinated. Convincing the vaccine eligible to protect themselves is the only way forward. Some of that can be accomplished with coercion: mandates that ban the unvaccinated from environments — airplanes, offices, schools, concerts, nursing homes — where they can harm others. But that’s going to work better in getting a small minority’s compliance in the communitarian regions than it is getting the massive vaccine-resistant crowd to get with the program in individual liberty regions.

In those places, far more might be gained by persuasion, and persuasion that emphasizes the advantages of vaccination from a personal freedom point of view, rather than the good of the community. The argument might go something like this: “Freedom isn’t free. You need to step up to protect it by getting vaccinated and wearing a mask in certain settings so we can crush this tyrannical virus so we can all get back to exercising our freedoms. And, hey, if you’re not playing along, you’re taking away our freedom (to attend school, play contact sports, go to movie theaters, hold in-person indoor graduations, weddings, and parties, or have a hospital bed to go to when we’re hit by a car, have a heart attack, or any number of calamities.) So make your little sacrifice for freedom. By the way, it might save your own life too.” Perhaps Donald Trump, Tucker Carlson, Tate Reeves, Ron DeSantis and the many other fully vaccinated leaders of the radical right will want to take this up —  it might save the lives of tens of thousands of their own followers.

Previous: Talking Union in York, Maine, Sept.14.
All Articles
Next: Paul LePage is back and Maine braces for a political storm