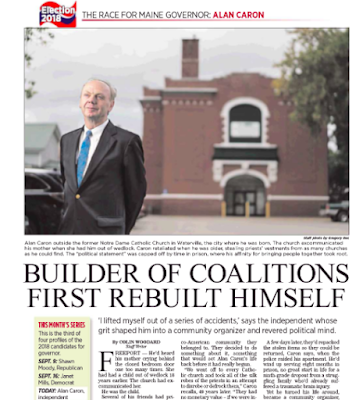 There’s a four-way race to replace Maine Governor Paul LePage, and I’ve been writing in-depth profiles of each of the contenders for the Maine Sunday Telegram — pieces that ask who they are, where they came from, and what shaped their world view.

The latest is on one of the two independents in the race, Alan Caron, whose life has included an eight-month prison term, brushes with militant radicals, successful community organizing, a career as a leading campaign strategist and proselytizer for an innovation-led “new Maine economy.”

It follows last week’s story on Democratic nominee Janet Mills and a one on Republican nominee Shawn Moody the week before that. The series concludes with independent Terry Hayes on Sept. 30.